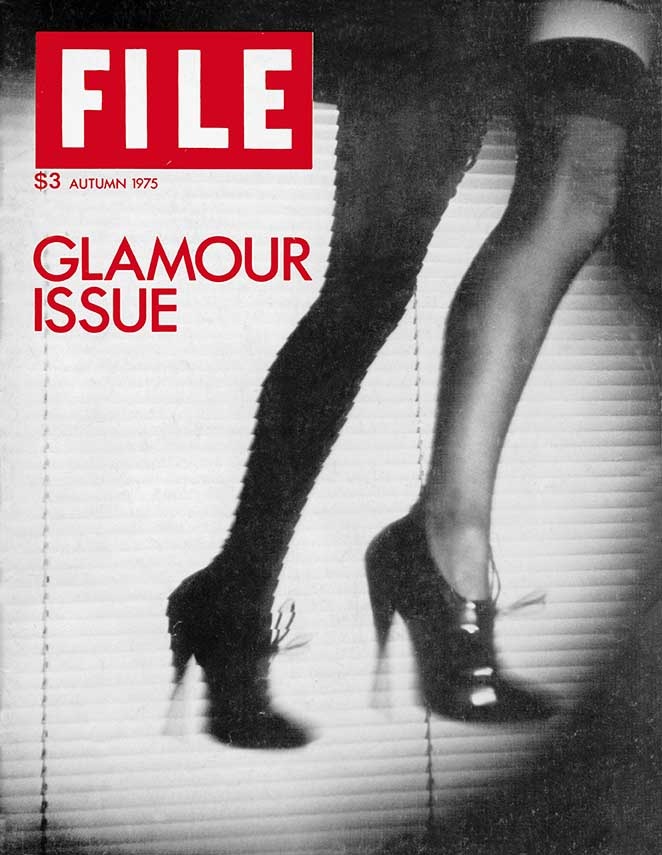 The Canadian collective General Idea was known for their exploration of mass culture and the art market, as well as their trio form that, at least throughout their existence, was never tied to a singular authorial identity. They often employed magazines, exhibition stands, paintings, postcards, posters, or wallpaper to address consumer culture and a society transfixed by media spectacle. By embracing the group’s historical contingency, a recent exhibition at the National Gallery of Canada carefully maps the shifting strategies, concerns, and artistic media entailed in a communal artistic practice that spanned 25 years. Being the most comprehensive retrospective to date, the show displays General Idea’s negotiation of collectivity as well as collaboration and thus emphasizes, as the art historian Tom McDonough demonstrates, their deployment of collective intelligence or, so to say, a general intellect.

As the current General Idea retrospective at the National Gallery of Canada (NGC) makes clear, the late-1960s origins of this trio of Canadian conceptualists weren’t exactly glamorous; if anything, they were shambolic. It would be more than half a decade before AA Bronson, Felix Partz, and Jorge Zontal formulated their “Glamour” manifesto in the pages of FILE, the group’s self-published magazine, in which they declared, with more than a hint of Warholian irony: “We wanted to be famous, glamourous [sic] and rich. That is to say we wanted to be artists and we knew that if we were famous and glamourous we could say we were artists and we would be.” [1] But in Toronto in the summer of 1969, as they began a collaboration that would last until the deaths of Partz and Zontal in 1994, the shifting cast of characters that was not yet known as General Idea was closer to the patchouli-scented values of the counterculture than those of wealth and fame. Initially based in a small house just outside Toronto’s downtown core, and soon in a much larger loft space about a mile south, the group lived and worked together as, in Bronson’s memory, “an extended family, a queer commune.” [2]

That early history has often been obscured by General Idea’s later tendency toward self-mythologizing, as well as by subsequent exhibitions that presented the group’s work thematically or even as the realization of a structural logic inherent in their project. The curator of the NGC retrospective, Adam Welch, chose instead to embrace historical contingency and to carefully map the shifting strategies and concerns entailed in a quarter-century of collaborative practice. An opening gallery presents something like the myth General Idea developed about itself, with works from various moments of the group’s career – most spectacularly the sequence of five self-portraits known as the “Three Men Series” (1983–1994), in which the artists appear in the guise of, say, children tucked together into bed, or college graduates, or seal pups in a frozen landscape, displayed against a backdrop of the repeated logos of their AIDS (Wallpaper) (1988). But the exhibition works to productively complicate this mythology, telling General Idea’s story along three long axes, extending roughly from the group’s foundations to the later 1970s, as they shed their communal origins and settled into their definitive triadic form; from that moment through their move to New York in 1986 and the first Imagevirus works of 1987; and lastly, their final seven years of work together, notably in a group of large-scale installations addressing HIV/AIDS.

The first galleries immerse the visitor in ephemera and archival materials generated by the early mail art and performance-based works that occupied much of General Idea’s attention through the early 1970s. These were not tied to a singular authorial identity, but to the loose cooperative who lived and worked together at the Toronto loft. As Bronson has recalled, “We weren’t interested in being an ‘I.’ We were influenced by Andy Warhol and his Factory because, in a sense, he was working anonymously. […] We took it a step further: at the beginning, it wasn’t even clear who was in the group and who wasn’t.” [3] Indeed, as late as 1974, the Italian art historian and critic Germano Celant listed its members as “Mimi Paige, Noah Dakota, A. Bronson, Felix Partz, Marcel Idea, Miss Honey, Miss Generality, Granada Gazelle, Jorge Saia and Ron Gabe.” [4] To Warholian anonymity, General Idea added protocols drawn from Fluxus and Conceptual practices, with a strong dose of salutary humor. The group’s name was, in many respects, an accident: an artwork submitted under that title to an exhibition in 1970 was mistaken for the name of the artists producing it, a fortuitous error they subsequently adopted. It echoes the titles of corporate entities such as General Motors, but unlike fellow Canadians N.E. Thing Co., founded in Vancouver in 1966, the group never flirted with corporate forms of organization. Quite the opposite: From our contemporary vantage point, General Idea might better be seen as rhyming with the Marxian concept of general intellect, whose model of mass intellectuality and of labor’s linguistic capacities resonates with the group’s early practices.

During their first years, General Idea constituted themselves less as a trio than as a fluid assemblage of individuals determined to experiment upon themselves and intervene within art-world systems of exhibition and validation, most notably through Miss General Idea, the hinge upon which their shifting identity turned. If the pageants of 1970 and 1971 exemplified the countercultural charge that animated the group’s founding – and depended upon the mail art and collaborative strategies predominant at that moment – the various plans for the fictional 1984 Miss General Idea Pageant Pavillion [sic] (begun 1973 and extending, in various forms, into the middle of the next decade) marked a gradual turn that was both aesthetic and social. By the mid-‘70s, the loose community inhabiting their loft had been pared down to three, and the former’s hippie spirit was being replaced by a new, cooler sensibility – in a word, by glamor. If a certain utopian communalism was undoubtedly lost in that shift, it was compensated by a practice ever more deeply informed by the media discourses so prevalent in Toronto at the time – Marshall McLuhan, needless to say, but also William S. Burroughs and, after its translation in 1970, Guy Debord’s Society of the Spectacle – which can be sensed in the turn toward appropriation and self-reflexivity in the conceptual documentation of the Pavillion found in the Showcard Series (1975). When in 1977 General Idea imagined that the nonexistent pavilion had burnt down, it enabled them to turn away from the more performative aspects of the project and focus instead on what they would call the “re-materialization of the art object.” [5] In the retrospective, this first arc of their career ends tellingly on the Boutique from the 1984 Miss General Idea Pavillion (1980), whose dollar-shaped counter was intended to offer various multiples for sale. 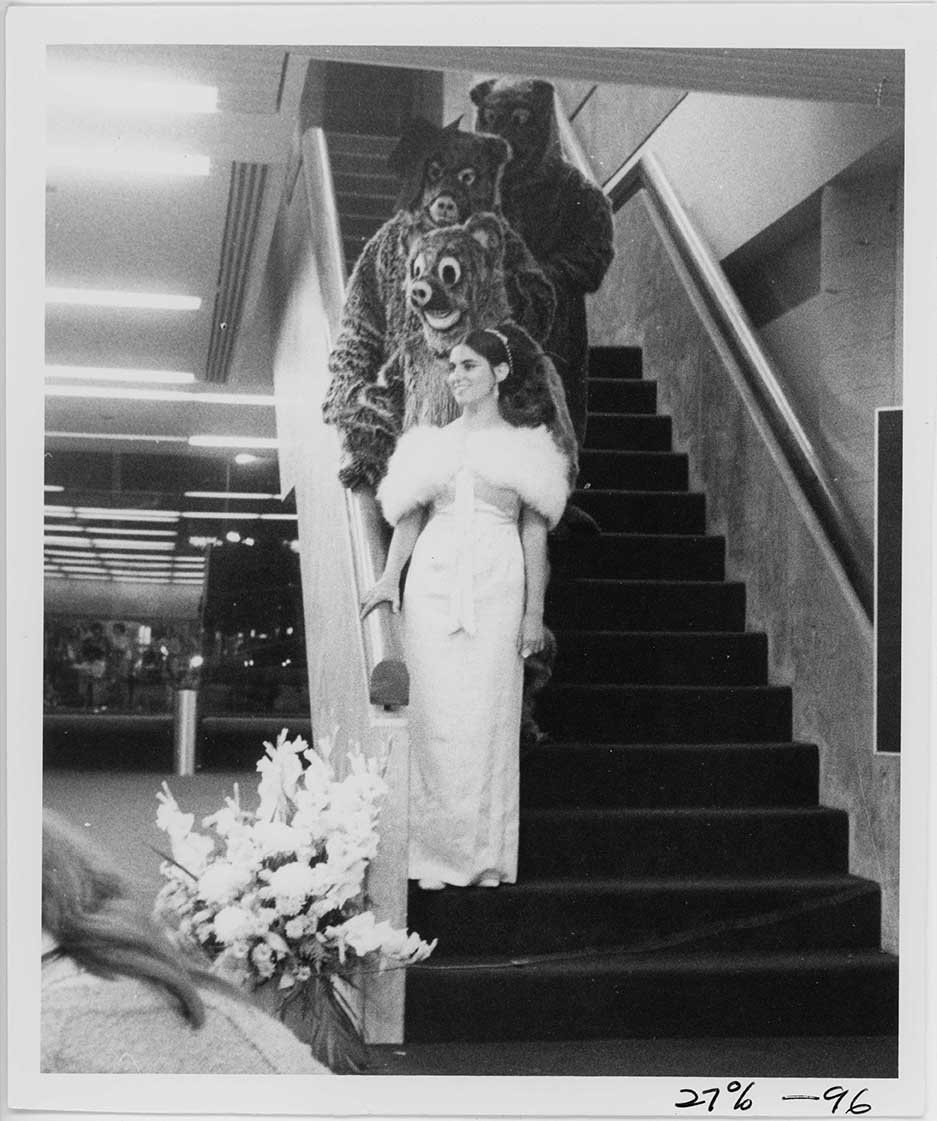 General Idea were, in other words, entering the art world. In 1975, they had declared that “We are famous, glamorous artists” and, by the end of the decade, they indeed found themselves exhibiting in prestigious European venues such as the Stedelijk (1979) and exhibitions including the Venice Biennale (1980), and Documenta (1982). Poking fun at their own accommodation to the commercial realm, they imagined themselves time and again as poodles, those servile lapdogs of the bourgeoisie, for example in the quasi-Pompeian “frescoes” they made in the early 1980s, archeological reconstructions supposedly salvaged from the Pavillion’s flames. But their move into the institutions was no simple retrenchment; rather, it entailed an expansion of those strategies of infiltration initially developed in projects such as FILE Megazine [sic] – launched in 1972 in ironic imitation of LIFE – into new domains of social life and mass media, as with Test Tube (1979), originally commissioned for Dutch television. At the National Gallery exhibition, these changes are also registered as shifts in scale: from the modest photographs, invitation cards, and posters documenting early conceptual performances to monumental installations, most notably in their works addressing AIDS, made between their move to New York in 1986 and the group’s demise after the loss of Partz and Zontal to AIDS-related complications in 1994. The pivot in this case is of course General Idea’s famous AIDS paintings (begun 1987), which transform the four letters of Robert Indiana’s well-known LOVE works (begun 1966), neatly registering the passage from sexual liberation to viral transmission – a motif they also printed on posters pasted up on streets and subways, as well as on the covers of Ontario Dentist and The Journal of the American Medical Association, on German lottery tickets, and postcards. Given an entire room at the NGC retrospective, these Imagevirus works—encompassing the various appropriations of Indiana as well as their mechanisms of distribution—open a series of galleries dedicated to large-scale sculptural works dealing with HIV/AIDS, with AZT capsules, the antiretroviral medication approved for treatment of HIV in 1987, making their appearance as repeated sculptural forms (One Day of AZT and One Year of AZT, both 1991) or as pill-shaped Mylar balloons (Magi© Bullet, 1992). 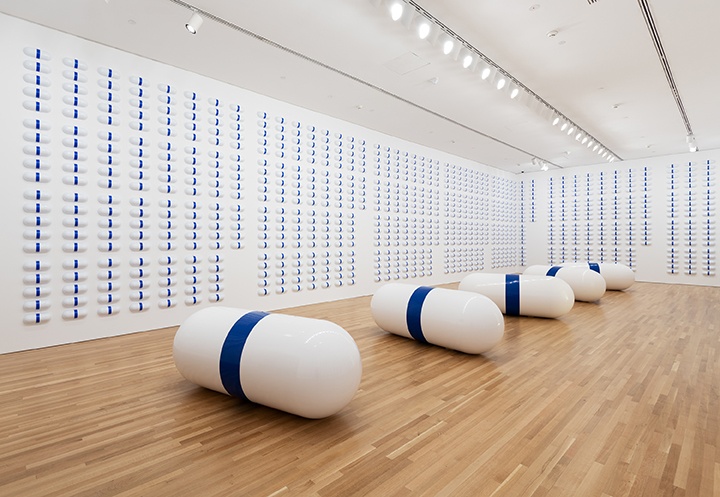 If, during its 25-year existence, General Idea often perceived itself to be misunderstood or marginalized, by 1994 they were being thought of as forebears to a younger generation drawn to their blurring of reality and fiction. Inventors of alternative worlds such as Pierre Huyghe and Philippe Parreno found shared cause with a group which had insisted that “current reality wasn’t sufficient for us, or we didn’t feel we belonged. So we had to create our own world, which was a kind of parody, an imperfect simulacrum of a perfect world.” [6] In the early 21st century, “readymade artist” Claire Fontaine reaffirmed General Idea’s strategy of contagion, speaking through Andy Warhol or Christopher Wool as the group had earlier engulfed Marcel Duchamp or Piet Mondrian. But what of today? The NGC retrospective, with its careful attention to the group’s negotiation of collectivity and collaboration, makes a case, if only implicitly, for their deployment of general intellect – from their earliest mail art networks to their final phagocytic appropriations of the avant-garde. The number three becomes important in this regard not as a stable trio but as the smallest instance of the communal, with all the joys and challenges that entails. When Bronson said he, Partz, and Zontal “became a kind of ménage à trois,” we might hear that as both queer desire and working paradigm, one explored in the polymorphous perversity of their Mondo Cane Kama Sutra paintings (1984), in which three poodles engage in the widest imaginable range of erotic conjunctions that are also a practice of philosophy in the bedroom. What we witness here – and the story the NGC retrospective tells – is precisely “this becoming one thing together, the three of us,” and that, as much as anything they made, is their lesson for our time. [7]

Tom McDonough is a critic, art historian, and professor at Binghamton University in upstate New York. He is currently writing Sowing the Wind, a history of the Situationist International.