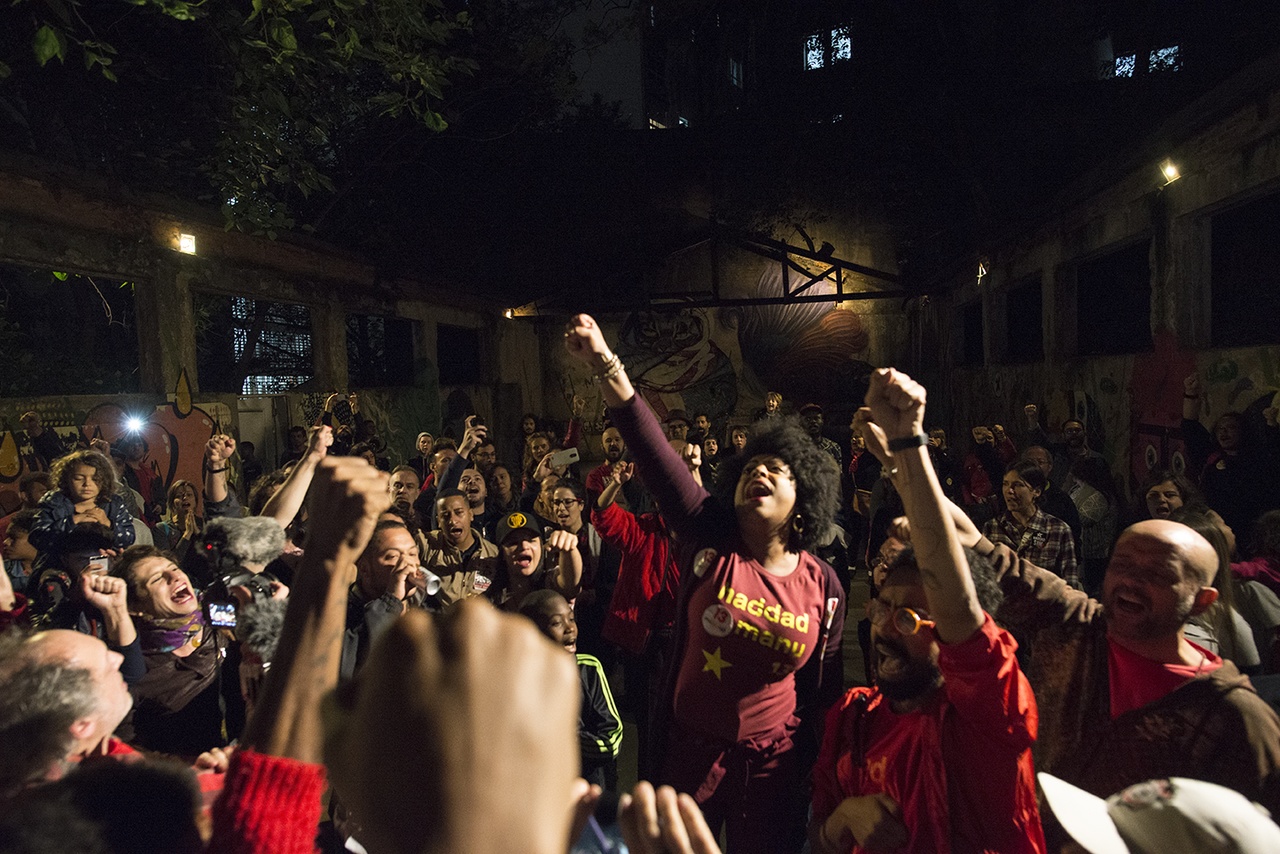 Preta Ferreira, center, is the daughter of Carmen Silva. She also spoke to the group that day at Ocupação 9 de Julho, São Paulo, 2018.

When quarantine was instituted in São Paulo by the state government, no specific protection measures were thought of by public agencies that would apply to the living conditions in the city’s peripheries. How can you wash your hands frequently if there is a lack of water, or follow school classes online and work remotely without access to the internet or computers? How can you stay at home if there isn’t a home to go to? In the 17th contribution to our column “Notes from Quarantine” curator, writer, and editor Isabella Rjeille analyzes the Brazilian situation during the current pandemic which adds to the process of ethnic-racial genocide and systematic precariousness under the rule of Bolsonaro’s campaign trademark, wherein he literally had in his hands a gesture that symbolizes the right to kill.

It was a Sunday in São Paulo, October 28, 2018, when in a room in the Ocupação 9 de Julho [1] we watched apprehensive on television the counting of the votes that carried the extreme-right candidate Jair Bolsonaro to the presidency of Brazil. After that news, we headed towards the courtyard of the building, where Carmen Silva, leader of the MSTC (the Movimento Sem Teto do Centro; Downtown Roofless People’s Movement), climbed onto a chair and gave a speech to the group of people gathered there. Among residents of the occupation and allies of the movement, she told us: “We are experiencing a setback in Brazil. But we’re not going to fall into their setback. We will carry out our resistance, as we always have. Not with guns, as Mr. Bolsonaro declared. It will be with our voice, our singing. It will be with love, because we are a family. Here is the real family – the one you love regardless of class, color, sexuality.” That night, the sadness over the news transformed into care and resistance.

Bolsonaro, a retired military officer, former federal deputy, and current far-right president, whose campaign was marked by the massive use of social networks and media like WhatsApp and surrounded by the circulation of Fake News, added to the rhetoric of exaltation of violence against his opponents. The use of weapons and figures from the Brazilian military dictatorship, permeated by racist, misogynistic, LGBTIQ-phobic statements, alongside slogans that exalt the nation, the family, and Christianity, created a fertile environment for maintaining the support of what today make up the 33 percent of Brazilians faithful to his government: a base of allies that have not even been deterred by the current political, economic, and health crisis. During his campaign, Bolsonaro placed special emphasis on arming the population, and his greatest trademark was a gesture that made his hands into a ‘weapon.’ That hand gesture, imitating a gun, was one he would replicate countless times in photographs for the press and social media networks.

Amidst the current pandemic, in which the concept of necropolitics, coined by Achille Mbembe, is recurrent and fundamental to analyze the Brazilian situation, I return to Bolsonaro’s campaign trademark, wherein he literally had in his hands a gesture that symbolizes the right to kill. A gesture that summons a kind of ‘justice’ according to individual criteria and that was replicated by its supporters in social networks in a kind of morbid performance. Whom was Bolsonaro addressing when he summoned the “armed population” to take over the streets?

The carrying of firearms in Brazil is prohibited except in certain cases: only public law enforcement agents, members of the army, and employees of private security companies may carry them or keep them at home (and usually have more than one). In an interview for The Intercept news channel, Luiz Alexandre Souza de Costa, a specialist in social and legal sciences and a major in the Rio de Janeiro Military Police reserve, commented on the dangers that the proximity between politicians and the police represents for democracy. [2] 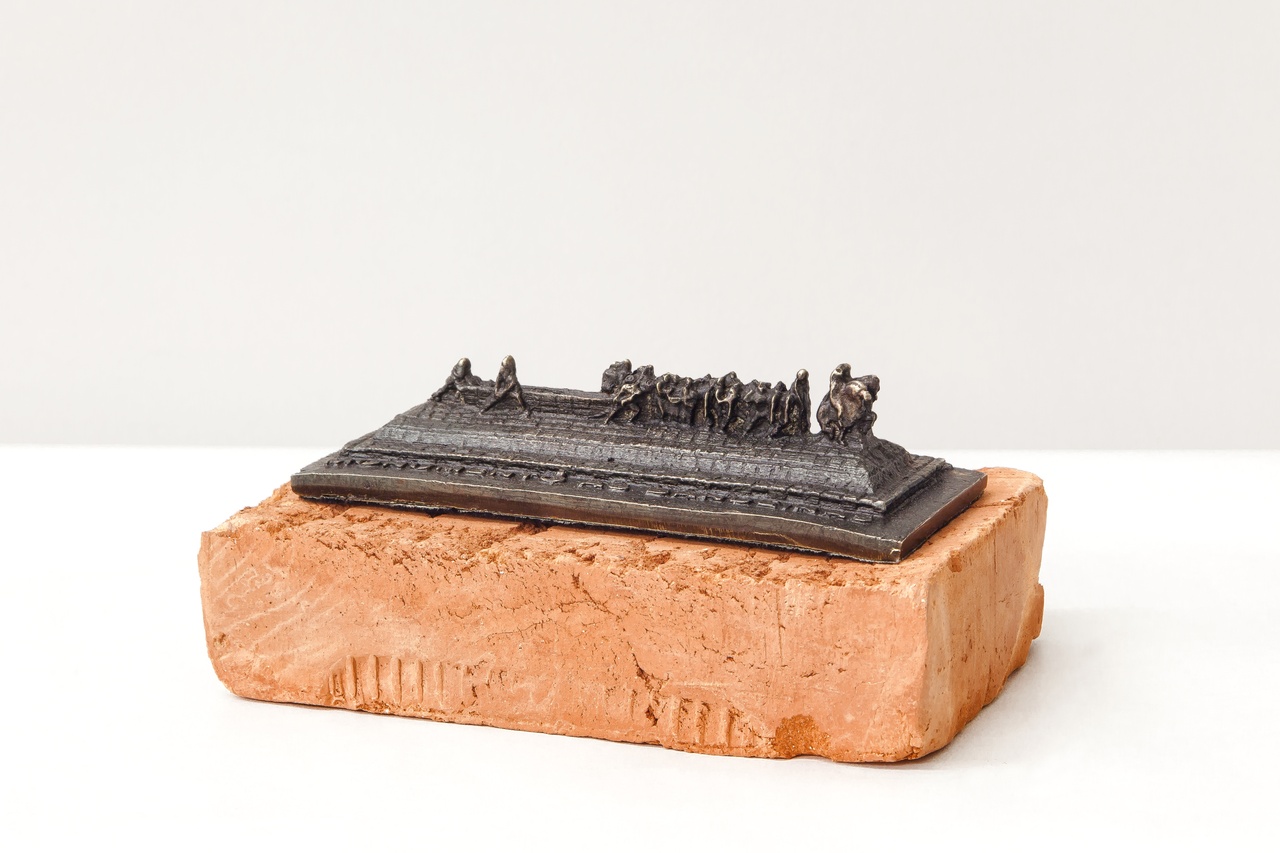 For Costa, the armed population to which Bolsonaro was referring would probably be the 750,000 active and reserve military personnel in the country who, according to a 2019 survey by the IPEA (Institute of Applied Economic Research), [3] can keep their state-issued weapons, even off-duty. This is the same group that exercises the state’s power of control over the population and whose members see Bolsonaro and his sons (also politicians) as strong allies. Even with the carrying of firearms prohibited for a large part of the population, the number of people killed by gun violence in Brazil is greater than in many countries in situations of war or armed civil conflict. [4]

Between 1980 and 2012, while Brazil’s population grew by 61 percent, the percentage of people killed by firearms grew by 387 percent – and over 460 percent when it came to young victims. Even with the approval of the Statute of Disarmament in 2003, this number has not stopped growing. And in 2017, 80 percent of young people killed by firearms were black in comparison to 17,5 percent who were white. Today, it is possible to affirm that every 23 minutes a young black man is killed in Brazil. As the singer and activist Bia Ferreira declared in a poem called “Necropolítica” (necropolitics): “If you're not targeted, you annihilate / Because the target is melanin”. [5] I mention these data before talking about the situation of the COVID-19 pandemic in the country as an attempt to outline, in a few words, how the Brazilian death machine – which has had black and indigenous people as its main target ever since the European invasion – operates.

In 2020, Brazilian necropolitics accelerated with the arrival of the current pandemic. As I write this text, the official death toll has reached 58,385 and the number of infected people in the country is already at 1,368,195. [6] Although there is a generality in the data and a great underreporting of the real numbers – since Brazil is one of the countries that tests the fewest suspected cases – we know that the populations most affected by the current health, political, and economic crisis are black, indigenous, and marginalized people. Without public policies of economic aid, these are the populations that face unemployment in the cities and lack of access to basic sanitation, to diagnostic tests, hospitals, and treatments for the disease and its complications. At the beginning of June this year, surveys indicated that 55 percent of COVID-19 deaths during hospitalization were of black people, while 38 percent were of white people – though the non-specification of ‘race’ and other relevant information that indicates ‘class’ in the official data makes it difficult to do a social mapping of the pandemic. [7] In the case of indigenous peoples, the monitoring of numbers is even more problematic, since the generality of information makes it challenging to recognize the regions and peoples most affected, thus damaging actions to combat outbreaks and provide treatment. [8]

When quarantine was instituted in São Paulo by the state government, no specific protection measures were thought of by public agencies that would apply to the living conditions in the city’s peripheries. [9] How can you wash your hands frequently if there is a lack of water, or follow school classes online and work remotely without access to the internet or computers? Or how can you stay at home if there isn’t a home to go to? [10] And when police violence kills, even when you stay inside your house during the pandemic, as was the case of the 14-year-old João Pedro, shot during a joint Federal and Civil Police operation while playing at home in the Complexo do Salgueiro, in the metropolitan region of Rio de Janeiro? Here, the pandemic adds to the process of ethnic-racial genocide and systematic precariousness that these lives have been subject to. As the anthropologist Eduardo Viveiros de Castro declared, “it’s terrible to say, but in Brazil, the state is the main ally of the pandemic.” [11]

I return to that Sunday in the Ocupação 9 de Julho and watch Carmen’s speech again in a short video recorded on my phone. That night, we did not imagine that a pandemic was waiting for us in 2020, but we knew that the Brazilian history of oppression and systemic violence did not begin with the figure of Bolsonaro, and the promise of resistance through voice, singing, and affect was certain. We also knew that a long road had to be travelled for this violent history to be discontinued – starting with whiteness, which urgently needs to be implicated in this narrative and understood as a socially constructed race, and with recognizing the structures that sustain its privileges, and with putting into practice the urgent deconstruction of its racist education.

Isabella Rjeille is a curator, writer, and editor based in São Paulo. She works as a curator at MASP (Museu de Arte de São Paulo Assis Chateaubriand) and co-editor of the newspaper Nossa Voz, a publication by Casa do Povo.