She does nothing and with pleasure.

“Future dates were checkered flags that have become hollow points on maps.” The mental mode of these days: “maybe next year.” In the 24th contribution to our column “Notes from Quarantine” the artist Nikita Gale, who was ill with COVID-19, takes the column’s title quite literally: in little glimpses, Gale examines the fact that over 170,000 Americans have died in this pandemic while the various interpersonal highways of racism now suddenly are being taken up by the voice of a White mainstream. Like Justine, the primary character of Lars von Trier’s “Melancholia,” whose illness is seen as a source of discomfort by those for whom everything is fine, Gale prefers seeing the disorder rather than a harmonious environment. Trying to get comfortable with anxiety.

The last flight I took this year was on February 25th. I was returning home to LA from New York, where I’d just spent two weeks organizing a performance at PS1 about the stakes of appearing in person. I had questions, most of which revolved around an ongoing investment in social infrastructures and how they shape our political and affective lives: What lies between the bodies and the sounds and the stage and the lights – what are we to each other in the act of witnessing? What have we agreed upon through the mere act of showing up?

About a week after arriving in LA, I got COVID-19. The last time I was seriously ill was around 2017, when I spent several days in bed, one of which I spent watching Lady Gaga’s documentary Gaga: Five Foot Two on Netflix. I wasn’t expecting to see a treatise on physical illness, but in hindsight, the title of the film – a clinical reference to Gaga’s height – was a hint. The documentary details Gaga’s experience of fibromyalgia and her attempts to manage the pain and discomfort in order to continue working in preparation for the Super Bowl halftime show. It’s a profound meditation on the physical alienation from one’s body that is required to meet the demands of capitalism. This is a body in pain. But it’s so many other bodies navigating sociopolitical structures that weren’t designed for their survival. Chromatica has turned out to be the traumapop album that we need and deserve in this moment.

I spent most of June riding the pendulum whose highest points were contempt and demoralization. Along the curve were confusion, judgment, anger, fear, disgust, and small keyholes of relief that held community and clandestine conversations. Emma Amos died. John Lewis died. George Floyd died. Breonna Taylor died and her murderers have still not been held accountable.

I attended a BLM protest on May 30 in the Fairfax neighborhood of Los Angeles and found myself at the boundary of a splitting crowd, experiencing in real time how a group of 20,000 people makes a decision to go in separate directions. What I learned there was that the problem with being at the boundary is that your sense of belonging to any particular part of the group is completely occluded, ambiguous. And then a police car was on fire and I just wanted to get back to my car, man.

Witnessing was once a highly localized act. You could only see what you were near, and the relationship between the senses and proximity was “fixed.” Digital media has decentralized this experience, making a distinction between what is sensed and what is acknowledged through the act of bearing witness. Vision and audition are extended and delayed, fractured, expanded, and minimized.

After witnessing the death of Philando Castile, I no longer watch videos of police murdering Black people. What local horrors and violence are legitimized by the global audience? What events take the stage? What is spectacular enough to leverage sentiment, the most valuable of which seems to always be outrage? How do you witness something that is not instant? That is still happening when you have woken up and gone to sleep for over 160 days? I acknowledge that these questions come from a place of privilege as someone living in a country that isn’t experiencing a military occupation or outright warfare in its streets, but the project of the United States of America has always been a slow ruin, not a spectacle.

Future dates were checkered flags that have become hollow points on maps. Maybe next year. I nestle postponements into sets of optimistic parentheses, the new universal symbol for “not canceled just yet.” Every previous day haunts the next. The increasingly decelerated and elaborate self-care rituals stack onto each other like transparency sheets on an overhead projector, somehow all together they make a vaguely recognizable shape – a future that looks a lot like the past. Days trace and retrace one another. Haunting the present with a familiarly shaped ritual in a slightly different time. Days are defined by when I open my eyes and for how long. Will I respond to this email in 30 seconds or in 30 days? 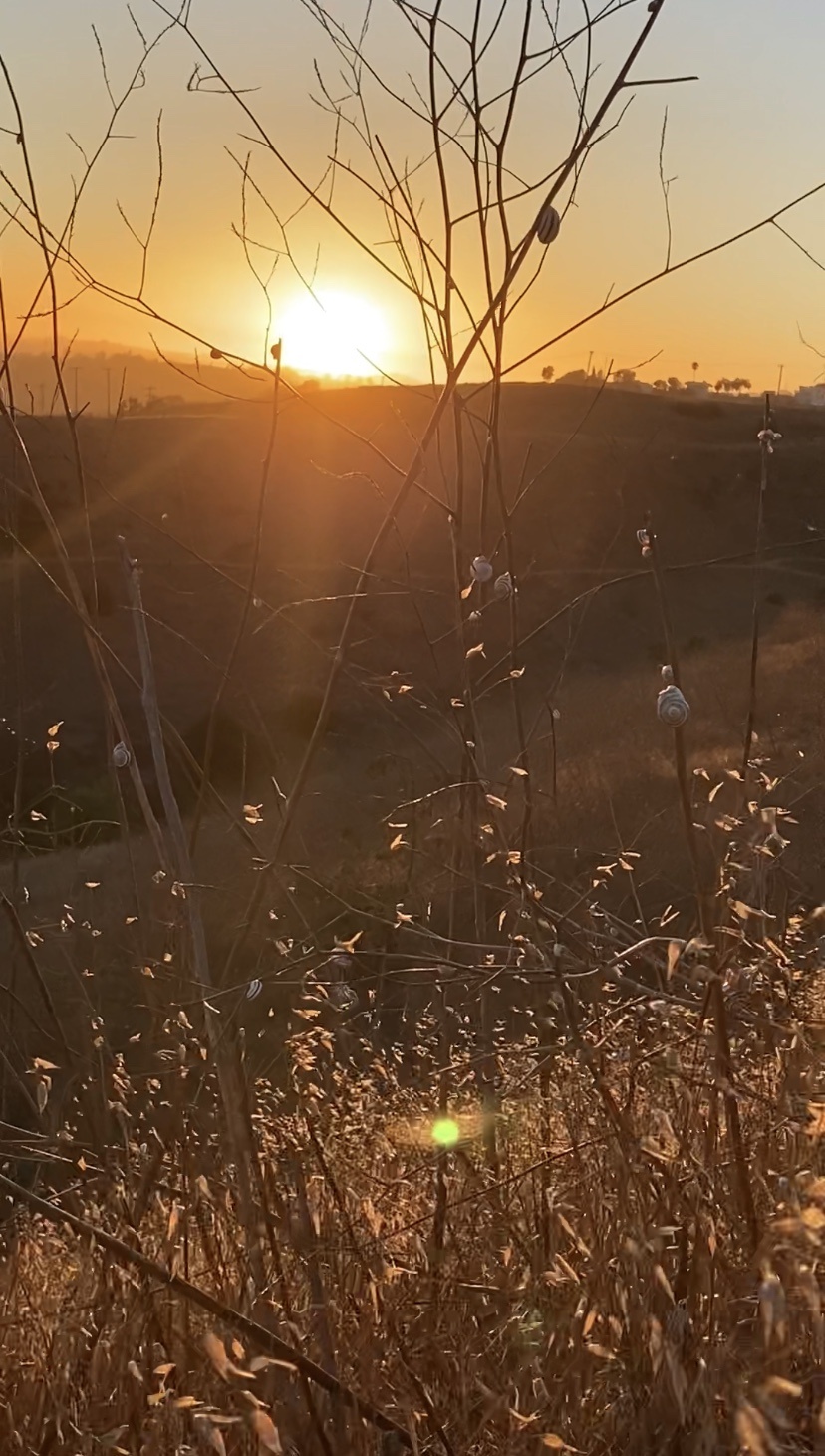 In the brush and brittle vegetation

My girlfriend and I have started hiking around the hills just north of our house. The first day we hiked, it was foggy and damp. We noticed thousands of little snails that had moved to the highest points they could find in the brush and brittle vegetation. It was beautiful, we thought. Then every week along the hike, we’d see the snails again, just sitting there, perched along the tips of branches, more or less in similar configurations to the ones in which we first encountered them. Eventually, we realized that the snails hadn’t moved at all. They weren’t even in the shells; they had died, dried up, and left the shells behind, stuck to whatever surfaces they could find in their final moments. Snails often do this when they are about to die – they find the highest point and release a chemical to warn others of impending danger. I have no idea what could have killed thousands of them simultaneously, but we see these empty shells every week on our hike. Thousands of tiny indexes of death. Confusing and beautiful.

In Lars von Trier’s Melancholia, the primary character, Justine, played by a sullen Kirsten Dunst, suffers from the disease for which the film is named. We are introduced to this character on her wedding night, establishing that even on what should be the happiest day of her life, she can’t quite shake this illness. It’s like soggy wool covering her body. It makes everything taste like ash. And it is not until the discovery of a planet, also called Melancholia, that is on course to collide with and obliterate Earth, that the world aligns with Justine’s psychological state. While everyone is overwhelmed by the gravity and horror of impending annihilation, Justine appears to be revived by it – she becomes the most sane and stable figure of every scene following the discovery of the nefarious planet. She begins to experience the relief afforded to those whose personal assumptions and beliefs are reflected in their external worlds. She moonbathes in a river; goes for walks; eats again. She does nothing and with pleasure.

I found myself identifying with this character in the wake of the protests in the US against police violence. After so many years of gaslighting experienced through the various interpersonal highways of racism, sexism, and homophobia, I began to do it to myself in unconscious and increasingly insidious ways. Everyone around Justine seemed to treat her like Cassandra – a figure cursed to see the disorder and darkness of the world with a clarity that was her curse to bear alone. Her melancholia was seen as an inconvenience and source of discomfort for those for whom everything was fine if not flat out “pretty good.” She does her best to mask it, to “smile and… smile and… smile.” And now suddenly, the nature of all of that disorder and darkness is being taken up by the voice of a White mainstream. A voice that seemed to be drowning out or diluting the voices of Black and Indigenous people who have struggled for the attention of the main-/White-stream. All of this talk about abolition and annihilation opens up realms of possibility. Justine was already annihilated – her sense of self was so warped by the dissonance between her sense of self and her environment that when the moment of consonance arrived, she seemed to merge into her surroundings. A harmonious environment abolishes the edges; makes living more possible. Abolition of violent and restrictive conditions might actually entail annihilating some parts of ourselves, and the level at which we may benefit from these structures is the level of annihilation required. The truth is: some of us may disappear altogether.

I couldn’t stop buying books for the first four months of quarantine. Every time I logged into a Zoom seminar or read an Instagram post, I would, almost without thinking, place the books that anyone mentioned into my Better World Books cart and watch the orders slowly roll in from Indiana or the UK. I would frequently forget what I’d purchased and would sometimes accidentally order duplicates. Somehow, I had decided that the answer to my problems was held in some intersection of ideas between all of these books I had ordered with a vague plan of reading. I’d been telling my therapist every week that things “were pretty good, considering…” as this new book stack closed in on 30 then 40. One day, I found myself journaling, getting comfortable with the word “anxiety” and thinking about my relationship to it. Having a word to attach to this feeling I’d experience right before hitting “Buy” was clarifying to say the very least. The last book ordered was Frank Herbert’s Dune on July 21st.

Nikita Gale is an American artist based in Los Angeles.