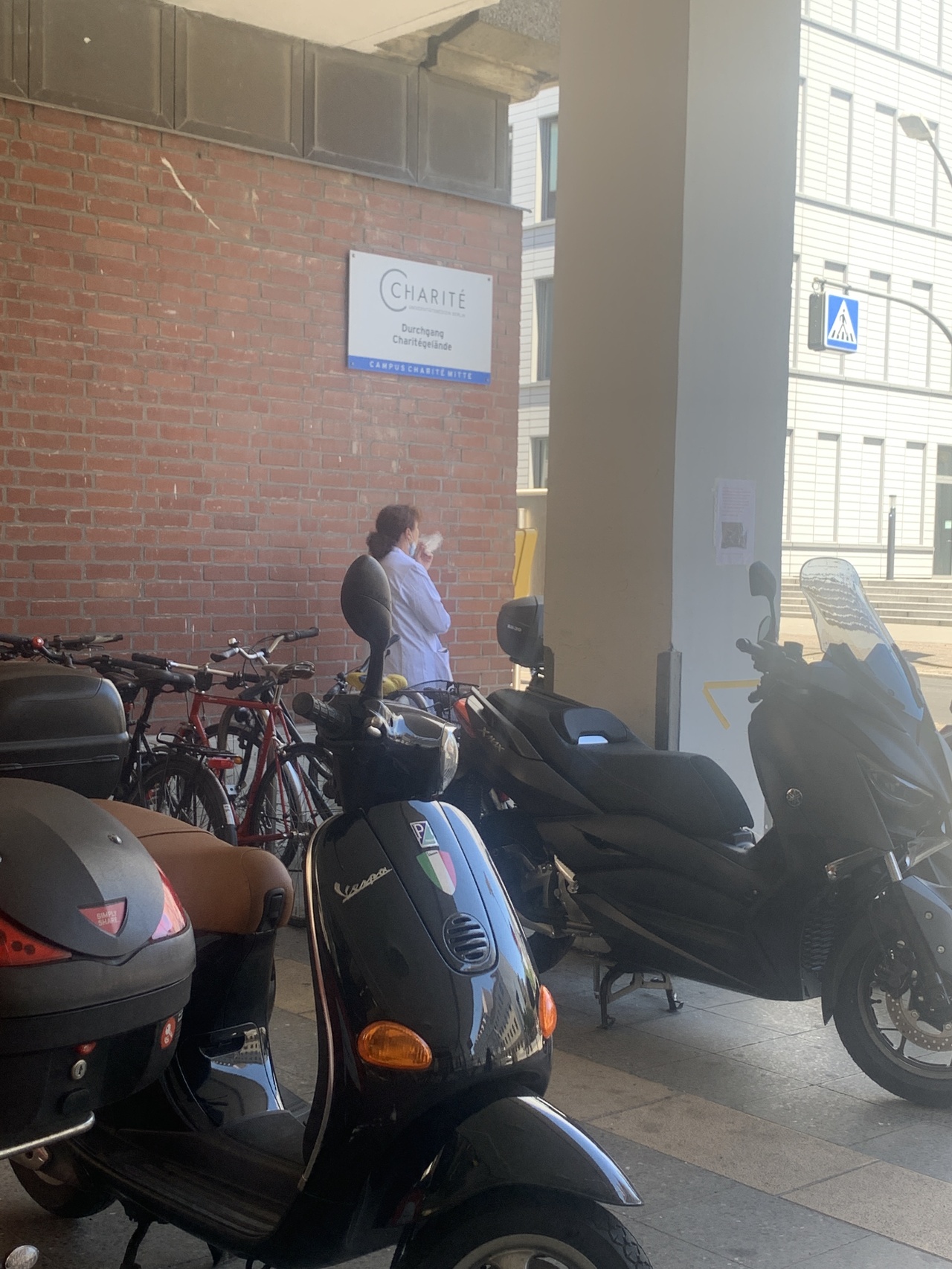 Above her mask, the psychiatrist’s eyes showed some remorse.

A woman goes to the doctor… In the 16th contribution to our column “Notes from Quarantine” artist Sofia Leiby interweaves various impressions from the emergency room to the optician: crying behind the mask, a doctor with a broken leg, and Mantegna’s dead Christ. The result is a panoptic view of everyday life in the clinic. “Eyes that roll down to the floor. Eyes that hold watery on the horizon. Eyes that dart across the room. Eyes that stare from a corner. Eyes that extend warmth.”

It happened during those days when our youth seemed to drop from us like a rocket detaching from a space shuttle. A sudden sloughing off, a discharging.

Our eyes itched from the new blooms.

In the emergency room, a choreography: moving from one chair to the other; a cough; the sheathing and unsheathing of a laptop from its case. A woman with an ice pack pressed to her head putting endless €2 coins into the vending machine, the hard chunk of rejection, and the clink of reinsertion, over and over and over. The repetition was hypnotizing.

Eyes that roll down to the floor. Eyes that hold watery on the horizon. Eyes that dart across the room. Eyes that stare from a corner. Eyes that extend warmth.

The room is a square. There is nothing to look at. I move to plug my phone into the wall. A man offers to change seats. I am aware how loud I am breathing. Chairs are emptied and replaced by new patients.

Two older boys, jovial and wearing all black, one with an arm in a sling, pull water from the Brita filter.

A female doctor with a broken leg sighs occasionally in pain.

There were characteristic beeps, rolling stretchers, bright orange EMTs performing perfunctory tasks, checking boxes, speaking collegially. A door is open, an old woman is lying in a bed. I see her from a foreshortened position, like Mantegna’s dead Christ. Her shirt is pulled up to her belly to reveal the two cups of champagne-colored bra. Behind is her small face, bearing a wan but lucid smile, framed by a halo of white hair.

Everything was so tied up with morality in those days.

Above her mask, the psychiatrist’s eyes showed some remorse, or audacity, or amusement, or all three. It was hard to tell. Her eyebrows were arched and serious, but her yellow pants made her look young.

I cried, there, and took off the mask. She said she wouldn’t tell anyone. It was hard to cry behind a mask. The snot ran from my nose back into my mouth, and I felt like a child, not knowing how to wipe my own nose. She gave me some kind of ammonia to wake up from the next attack, some sort of chemical stick to torture the brain into thinking straight, and a letter on hospital letterhead which she gave to me in front of the others in the waiting room, like a king sending a knight off into battle. 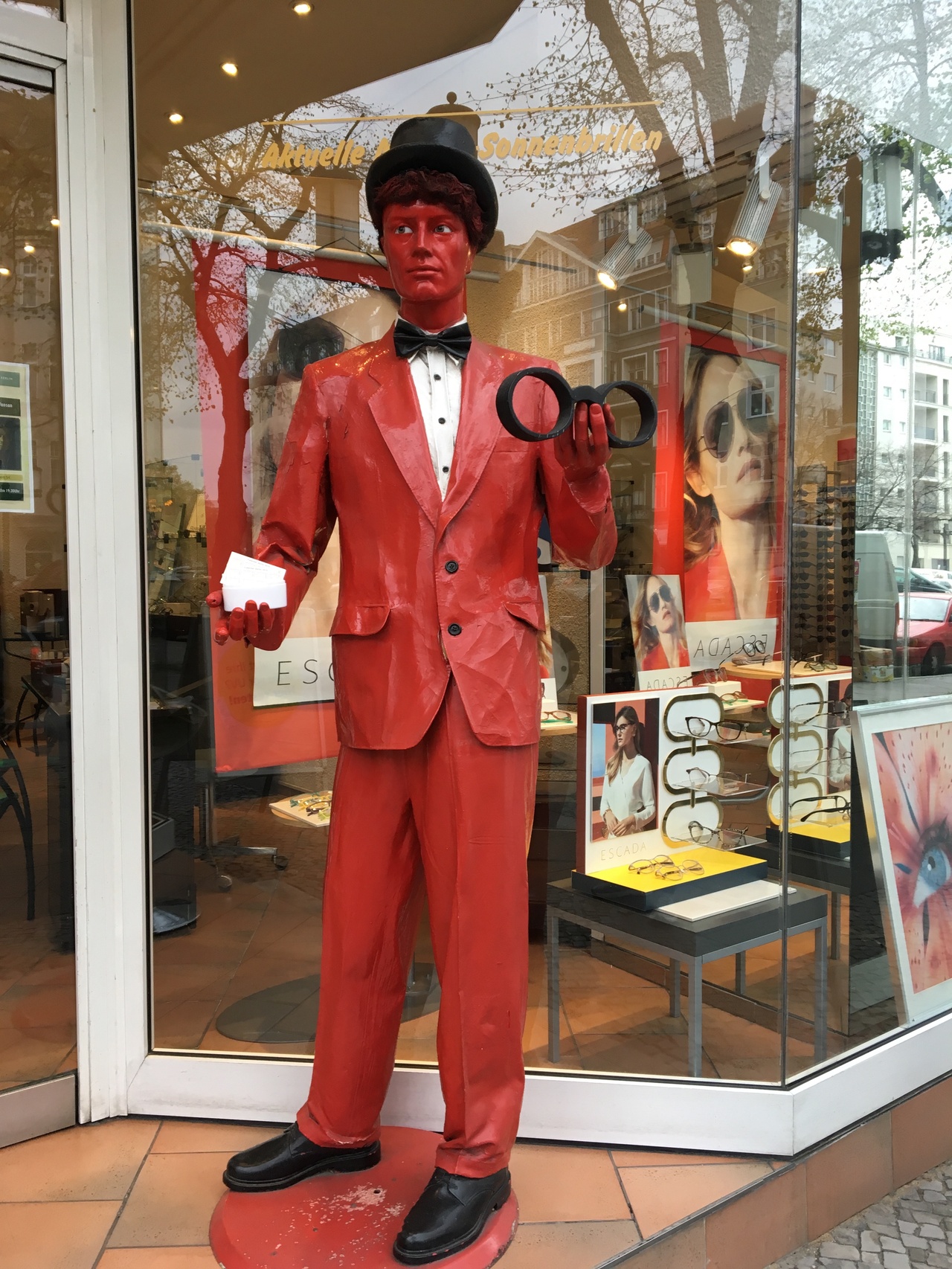 I try to explain what is wrong with my vision.

From emergency to the optician.

A young man with the optician’s favored appearance of an almost piercing grooming greets me. He unwraps me from my coat. I sit with my mask in the chair. I try to explain what is wrong with my vision. Is it the left eye? Right eye? he asks innocently. The month before I had purchased two boxes of lenses, six months each.

Long distance? Near? How did you first notice something was wrong? My German is not good and neither is his English. I can’t afford nuance. I swirled my finger above my head. I don’t know what is wrong, or if anything is wrong, I said, trying to explain my compulsive booking of the eye exam.

I just think something is wrong, maybe.

Ok, he says. He places the butterfly-like device over my head. He checks diligently. He asks all the questions. He clicks one slide to the next, alternately sharpening and obscuring my reality. He puts the same contacts back into my eyes.

I cannot glean his expression. It is a small difference, he says. What do you suggest we do? I take the samples and go home. Suddenly I can see just fine.

Sofia Leiby is an artist based in Berlin.