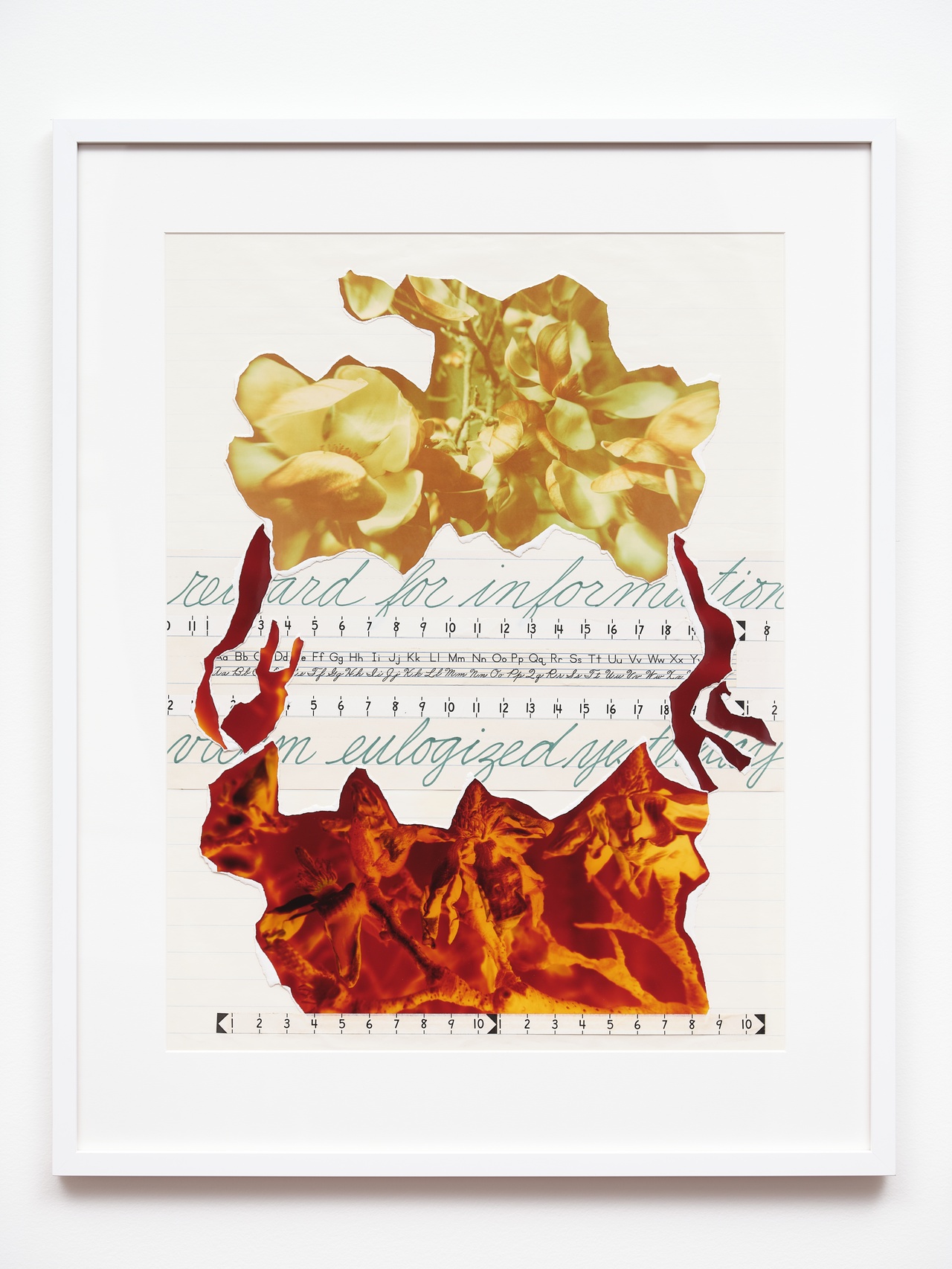 Continuing the theme of our current issue, “Resortization,” the latest contribution to this biweekly column takes us to a place that is nowhere and everywhere, near and yet far, residing in distant server farms but permeating all our lives – all while being operated by a relatively small number of opaque platforms. Call it the infosphere, realm of data, cloud-cuckoo-land, or a place of no escape. We are all citizens of this curious domain, which seems ethereal but is, above all, controlled by hard commercial interests. The point of departure for our author, the artist Simon Denny, is an artwork from which he follows clues and connections to arrive at a business that borrows its name from fantasy yet co-determines our current reality to a quite an unpleasant extent.

A photography review published in the Chicago Tribune in 1986 describes a cyanotype by the US artist Leah Jaynes Karp which, on first impression, “suggests a telescopic image of swirls of cosmic dust in space or a fiber optics view of the womb and the umbilical cord.” [1] A confluence, it sounds like, between biological reproduction – family ties – and the infrastructure of communications technology. On closer inspection, the print reveals itself to be based on a photograph of “a chubby hand holding two worms.” The review notes that the hand belongs to “one of Karp’s sons the summer he learned to fish.” [2] It isn’t specified, but one might wonder whether it is the hand of her son Alexander.

Leah Jaynes Karp hails from Illinois. Her art career began in earnest after she raised her two children; she returned to school, proceeding to earn art degrees at the undergraduate and graduate levels. Pictures of Karp’s family are a common motif in her artwork, although not in Reward for Information-Victim Eulogized Yesterday (1982), a beautiful collage where cutouts of flowers are layered onto a background resembling a ruled notebook page.

As its striking title suggests, this work is rather more mournful. Karp made this collage as part of a series in the early 1980s in response to the Atlanta Child Murders – the kidnapping and killing of nearly thirty Black children, mostly boys, in Atlanta between 1979 and 1981. The artworks in the series appropriate text from news articles detailing the events, depicted here in the visual lexicon of primary school education, alphabets, and cursive lettering practice. The cutout flowers – lilies – recall, in light of the work’s title, the sympathy bouquets that are common at funerals.

The notebook and rulers evoke, aside from pedagogical associations, the realm of data and quantification. The artwork’s name, Reward for Information-Victim Eulogized Yesterday, bears three words on either side of its hyphen – the mark, like the equal sign in a balanced mathematical equation, sitting in the middle like a central fulcrum. It can be read like a mistyped dash, creating a statement of two successive clauses, as though it were a newspaper headline announcing a bounty for tips that help locate the perpetrator of an implied homicide. But the hyphenation of “Information-Victim” also gives rise to a different meaning in the present, suggesting a life that has been lost at the hand of data itself.

Leah Jaynes Karp’s son Alex – whose childhood fishing trip may or may not be depicted in the work discussed above – grew up to attend a liberal arts college and then Stanford Law, where he developed a somewhat unlikely friendship with a young Peter Thiel. Together, Thiel and Alex Karp founded a company named for the seeing-stones in Tolkien’s Lord of the Rings: Palantir Technologies. Michael Steinberger’s New York Times profile of Alex Karp mentions, in passing, that his mother was an artist. It also provides a detailed overview of Palantir’s software products. Its flagship programs, Gotham and Foundry, “gather and process vast quantities of data in order to identify connections, patterns and trends that might elude human analysts.”# [3]

Palantir’s work consists in making sense of vast quantities of information, synthesizing the various data streams that a company or government might collect into usable, valuable insight. Thanks to its tools, information of different kinds ranging from phone numbers to photos to text messages to tax returns can be digested and displayed on a single platform, presented in tables, graphs, heat maps, and even AI models. Palantir’s genesis dates to the days after 9/11, when Thiel realized that the anti-fraud algorithms used by PayPal, which he had cofounded, might be useful in counterterrorism efforts. Thiel tapped Karp to become Palantir’s CEO, sidetracking him from the life of “intellectual pursuits and various forms of debauchery” [4] he had sought to establish in Berlin, where he had settled after law school. The fledgling company delivered on its ambitions, and eventually earned the moniker “Killer App” for its role in helping find and catch Osama bin Laden. Now, Palantir’s technology is used by militaries and the intelligence sector – the CIA’s venture-capital arm, In-Q-Tel, provided some of the early seed funding – and private businesses alike.

To the wide variety of its customers who are not engaged in counterterrorism, one of Palantir’s most valuable outputs might be thought of as a social graph – a term which entered the vernacular after Facebook, at its F8 conference in 2007, introduced it to describe a visual representation of the interconnected relationships borne by a user in a given social network. Unlike a social network itself, a social graph is understood to be rigorously mathematical, the product of targeted quantitative analysis – precisely of the sort Palantir’s “data integration” tools offer. It is fundamental to social media platforms’ business models, the bedrock of their insight into who likes what, who knows whom, and who and what we might buy, pay attention to, or vote for as a result.

In this sense, Palantir has perfected the annexation of social connections into capital, as the collection and analysis of user data became the default business model for companies like Facebook (now named Meta). (Recall that Thiel, Palantir’s cofounder, was also one of Facebook’s first outside investors.) Allegations of a more tangible connection between the two companies also reverberate: whistleblower Christopher Wylie, whose revelations were instrumental in bringing to light Cambridge Analytica’s involvement in shaping the outcome of the 2020 US presidential election, claims that Palantir worked with Cambridge Analytica to process data harvested from Facebook users on behalf of the Trump campaign. [5]

Palantir’s business shows that social graphs aren’t only a source of value to be captured by platforms. The company has drawn criticism for its work with police departments, including the LAPD: its data integration tools are hugely valuable for predictive policing, the use of quantitative analysis to preemptively identify sites where a future crime is statistically likely to take place, a tactic that critics believe encourages racially-biased and overly aggressive law enforcement. Under the Trump administration, Palantir provided its services to US Customs and Border Enforcement (ICE).

As both mother and son seem to intuit, information is a matter of life and death. The work of both Alex and Leah Jaynes Karp, each in its own way, frames what is at stake in the mapping, tracking, and comprehension of users’ (that is, ultimately, people’s) connections, lineages, and exchanges across place and time. Isabelle Graw, in her theses on the “resortization” of the art world published in Texte zur Kunst’s current issue, lays forth how social media platforms have created a “sphere in which economic pressures trump all other considerations – a space that resembles the resort.” [6] In these thoroughly capitalized enclaves, “users surrender their data to a platform company that squeezes profit from them” and worse, which Graw establishes by gesturing towards Joseph Vogl’s Capital and Ressentiment [7] , and a thesis that finds its ultimate exemplar in Palantir.

The Chicago Tribune review from 1986 continues: “Karp, too, works in media other than her highly tactile fan-shaped reliefs. But the fans remain an unfinished scrapbook about being a black woman, the daughter of a Baptist minister, who marries into a Jewish family and has two sons. The scrapbook, like the diary, is never complete while life goes on and Karp continues to generate new fans for the series.” [8] From the social graph to the scrapbook, the contours of lived experience leave a residue of information, which can be alchemized into value. Who is enriched by the processing of information, and who is made to be its victim?

Simon Denny (b. 1982 in Auckland) lives and works in Berlin. He makes exhibitions and projects that unpack the stories technologists tell us about the world using a variety of media including installation, sculpture, print, painting, video, and NFTs. He co-founded the artist mentoring program BPA//Berlin Program for Artists and serves as a Professor of Time-Based Media at the HFBK Hamburg.