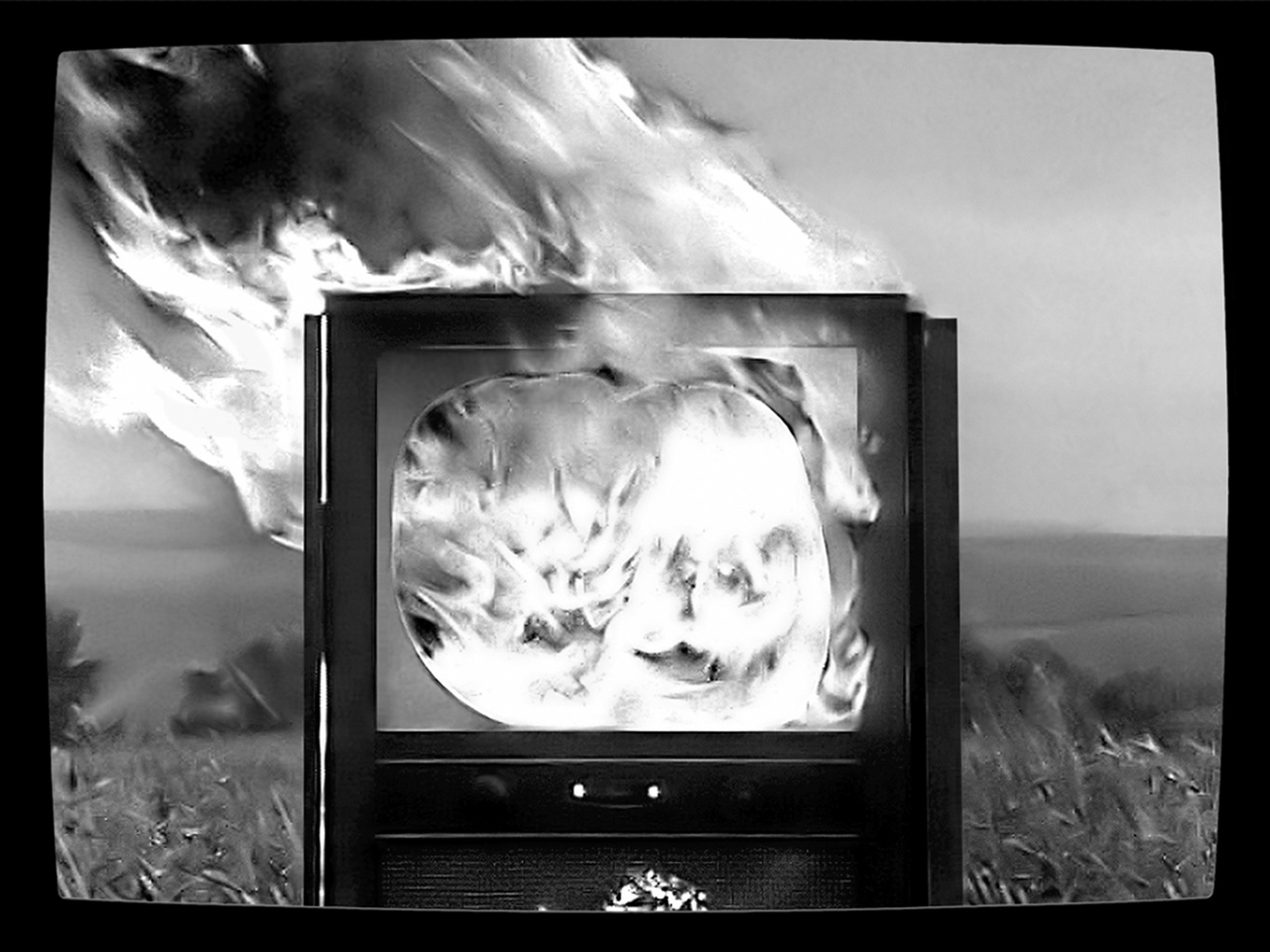 Under the heading “Current Attractions,” we are publishing a biweekly column where authors from different disciplines discuss a cultural object of their choice that relates to the current issue. This week’s iteration closes the theme of “Mourning.” Our image and online editor Anna Sinofzik takes David Hall’s video Burning TV (1971) as a starting point to reflect on the changing perception of fire and its omnipresence in the era of the anthropocene.

An image has been flaring up in my mind for a few weeks: It’s a still from David Hall’s pioneering video work TV Interruptions (1971), a series of seven short episodes, which once hit Scottish television screens without further notice or contextualization. It is an image from Burning TV; like all of Hall’s interruption pieces, the clip was designed to interrupt the program and motivate meta-discussions about the medium. It features a classic CRT television, up in flames, parked in a prairie. Unlike Jan Dibbets’ true to title video work TV as a Fireplace (1968) – which was broadcast by the West German channel WDR two years before Hall's episodes aired on Scottish television – Burning TV combines the false comfort of an on-screen fire with an air of destruction. As if to reaffirm the fact that the world is on fire, both literally and figuratively, the piece came to my mind recently when I watched the evening news, letting images wash over me through the kind of lethargic haze Hall once sought to interrupt. While his TV Interruptions managed to strike a balance between “suggestion of a connection and enough distinction to provoke reflection,” [1] all televised proof that the planet is burning instills in me a strange sense of distance.

The metaphor of fire as disaster receives fuel every day, whether in the abuse of firearms, firefights on battlefields, fires in built environments, blazing forests, brutal slash-and-burn farming. But however drastic, images smolder, then fade. During the first months of the pandemic, the forced interruption of large parts of life was often portrayed as a tough time with a favorable flip-side. Today, while Covid isn’t over, the so-called anthropause [2] certainly is: What some declared a disruptive moment of opportunity to rethink the human impact on a planet that seemed, at least for a while, a little less hectic, polluted, and crowded, turned out to be a brief episode.

Media images of flames, dust, and debris not only made me look back into Hall’s work recently – they also lead me to a paper by Stephen J. Pyne. In “Fire in the mind: changing understandings of fire in Western civilization,” the environmental historian emphasizes that the power of humankind is fundamentally “a fire power,” and explores how, over the millennia, fire’s status as a cultural object has shifted: Especially over the course of the “pyric transition” – a period closely linked to industrialization, when fossil fuels became the primary source that powered economies – the image of fire has (especially in Western cultures) transformed from a worshipped element to one that is feared and held at bay. As ever more humans moved from rural regions where fire was mostly revered to cities where it was contained and turned into energy, fire became one of many forces to be owned and suppressed and the way of handling it ended up forming part of greater strategies of oppression. [3]

Sparked by a surge of environmental changes, all of which are gathered under the umbrella term Anthropocene, Aristotle’s “first element” has been returning to prominence in recent years, both as a practical as and a political challenge. Research clusters examine the complex relationship between humans and fire, highlighting the importance of interdisciplinary debate on the effect of anthropogenic burning on global warming.

Inextricably tied to capitalism and colonialism, the climate crisis is not least the consequence of a logic based on the exploitation of labor, precarity, and inequality – a logic in which fire has long played an important role. Be it in firefights or factories, fire has a history of serving as a means for producing power and to manifest power structures. Today, the increase of wildfires is often presented as a result of global warming, but the single-edged, “modern” usage of fire is rarely mentioned as one of its causes. Pyne points to the benefits of natural fire, once harnessed by ancient farming techniques, which have been increasingly suppressed since the beginning of the Enlightenment and are slowly being rediscovered today. The question is “not simply how much burns, but how it burns,” Pyne argues. A growing number of experts see the need for new narratives that promote a more nuanced notion of fire. They also address the responsibility of the arts and cultural scholars, who have long mainly turned to fire as a metaphor poised between doom and passion, with a tried and tested capacity to catch attention and warm heavy hearts.

Gaston Bachelard describes fire “as both a destructive and creative force with a multitude of inherited symbolic meanings that are deep-seated in our unconsciousness,” as an element that unites “the instinct for living and the instinct for dying,” thus reminding us of our own ambivalences. [4] Of particular prominence today: The conflicted tangle of what is perceived as a collective burnout and the old yearning “to burn, burn, burn, like fabulous yellow roman candles exploding like spiders across the stars.” [5] The way in which fire has been overcharged with often opposite meanings surely doesn’t help clarify our relationship with it. Pyne seems right in saying that “[w]e have created too much of the wrong kind of fire, too little of the right. And now there’s fire in all the wrong places.”[6]

As David Hall once remarked with regard to his TV Interruptions: “Everybody talks about being in the right place at the right time,” while he himself “always quite liked being in the wrong place at the right time.”[7] When the artist produced a new version of his series for MTV in the nineties, the films no longer acted as interruptions; amid heterogeneous music clips and animations, they barely stood out but became fully incorporated into the flow of the program and a constitutive feature of the channel’s visual identity. Fast-forward to the digitalized present and disruption is perceived as a permanent condition.

In the context of the ecological crisis, the recent glut of burning issues has birthed buzzwords such as “climate grief” or “environmental melancholia.” [8] The image of the melancholic who enjoys their sadness sketched by Victor Hugo took its inspiration from water views in Les Travailleurs de la Mer [9] but fits in just as well with the domesticated danger-cum-comfort of a crackling fire. The current mood, however, resonates more strongly with Lacan’s concept of moral cowardice, which describes melancholy and depression as results of the failure to fulfill one's “duty to be well-spoken, to find one's way in dealing with the unconscious, with the structure.”[10] It is of course pure coincidence that this quote was taken from the book Television.

Hall's Burning TV employs the basic principle of mise en abyme without playing it through: Instead of having us look into the abyss of infinite repetition, it features a fire on a screen within our screens, ready to propagate from an absolute reference point into infinite expanse, as if to illustrate the simple fact that all the actual and metaphorical fires on our screens transgress the bounds of their media presence. Hall himself was concerned with transgressing the confines of institutional television. However, his Interruptions are, as it was said in an obituary in Artforum, “by design, very much of their medium rather than against it.” Hall saw his work as reflexive of the televisual experience “without being oppositional,” wanted to work with it without falling into a “reductive anti-illusionist cul-de-sac.” [11] In art as well as in dealing with nature, it has proven worthwhile to work with what’s there and to reconsider the common use of certain elements.

I have seen Burning TV in an installation that brought together all 7 TV Interruptions at Tate Modern years ago, but I can’t recall how exactly the episode ends. I haven’t found the full clip online – only one of its siblings, the Tap Piece, where a running faucet fills the screen with water. Once it reaches the top, the camera tilts to the side, and someone takes out the plug. We see the water drain away sideways, at a 45-degree angle. It’s a nightmarish sequence, reminiscent of the view out the window of a sinking ship, in a world turned upside down. Watch it if you have four spare minutes before resuming your program.

Anna Sinofzik is the image and online editor of Texte zur Kunst.