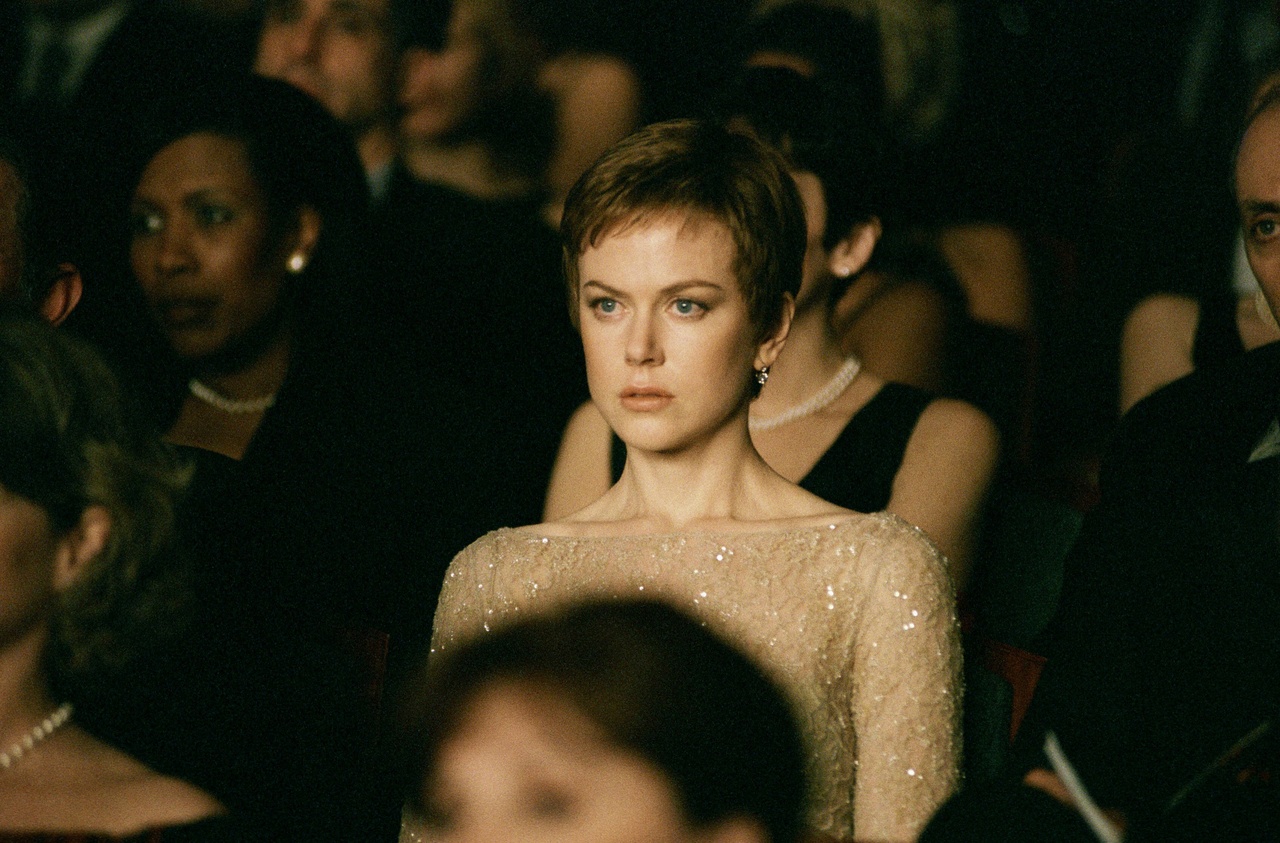 Under the heading Current Attractions, we are publishing a regular column every two weeks in which authors from different disciplines discuss a cultural object of their choice. For this week’s iteration, Philippa Snow reflects on Jonathan Glazer’s 2004 drama film Birth.

The fact that Jonathan Glazer’s Birth (2004) is a depressing film has less to do with the fact it is about grief than with the fact that it is about true love being a total sham—yes, Nicole Kidman’s Anna, who moves through the movie with the air of one half-dreaming, is so deranged by her longing for her deceased husband that she’s willing to resort to theoretical pedophilia, but the film’s real tragedy is that all of this derangement is in vain. On its face, Birth is about the possibility of reincarnation, and it is also about the lengths a grieving person is willing to go to in order to reconnect with someone dead. Actually, it is about just how little we know about those we love, who are about as likely to reveal all of themselves to us in life as they are to, for instance, reappear to us a decade after dying in the new and unfamiliar body of a child. Its plot is, to say the least, provocative, a thought experiment about metempsychosis that seems poised to tip over into being an erotic thriller starring Nicole Kidman and a ten-year-old boy. As it opens, Anna, who has just agreed to marry her tedious new boyfriend, is celebrating her mother’s birthday at a party when she is approached by a small, serious youth claiming to be the reincarnation of her husband, who dropped dead ten years earlier while jogging in the park. At first, she disbelieves him; later, desperately and irrationally, she begins to change her mind. Sean, the boy, knows things that only Sean, the man she married, could have known, and the child’s stillness and unsmiling manner are unnerving, making him seem preternaturally mature. Things take a turn for either the sickening or the darkly comic, depending on your perspective: Anna, hanging around Sean-the-boy, begins discussing their future, even asking him how he intends to please her in the same ways Sean-the-man did, given that he’s ten years old and presumably does not yet understand sex.

The film’s solution to its edgy central question is, ultimately, entirely un-supernatural, and has to do with a cache of buried letters that the child has unearthed in a nearby park; written by Anna for her husband, who then callously gave them unopened to his mistress for her to dispose of, their intimacy has bewitched Sean-the-boy so deeply that he has begun to believe his own lie about reincarnation. If this sounds like an extremely convoluted way for Birth to rationalize the first 90-or-so minutes of its runtime, it’s because it is extremely convoluted, and its convolution has led numerous critics to suggest that they do not entirely buy the answer Glazer has provided to the mystery. (How, for instance, does the child know where Sean died, given that this would not have been recorded in the letters?) Robbed of any spiritual dimension, however, Birth is an admirably dark film. When the boy tells Anna that he knows he is not Sean because, unlike Sean, he actually loves her, it is almost unbearably painful, a rebuke not only to the idea that there is life after death, but to the idea that life on Earth is beautiful or meaningful enough to be worth bothering to return to in the first place. The film’s visual style, gorgeous and stately but not all that warm or human, adds to Birth’s uncanniness, its suggestion of a world that is rich in the sense of being literally infused with cash, but not rich in experience or pleasure or essential value. Obviously, money cannot buy us happiness; Birth reminds us that it cannot buy us love or undo – or even defer – death itself.

Birth’s most iconic scene shows Anna at the opera, seconds after she has first begun to think that little Sean might be the real deal. Glazer lets the camera draw in on her face, and we watch huge waves of emotion crash over and over again on her features – anguish, ecstasy, anguish, ecstasy, and so on. The first time around, it seems as if we’re watching her begin to hope again in real time. Once we know the film’s conclusion, it becomes obvious that what we are watching is the gradual, unstoppable approach of madness. Over the years, Nicole Kidman herself has become more opaque and mysterious, and her age – physically, if not chronologically – has become indeterminate, all of these things springing from the apparent cosmetic freezing of her face. That it is considered to be more professionally advantageous for a powerhouse actress to immobilize her most valuable tool than it is for her to dare to be middle-aged is a Hollywood rule so terribly perverse that, much like Glazer’s final answer to the spooky mystery of Birth, any explanation for it feels inadequate. The opera scene is, I think, partly remarked upon as a result of the delicate mobility of Kidman’s features, and for the way it functions as a time capsule of her obvious skill. In this sense, the sequence is about something lost, too, and as such is capable of inducing a feeling like grief in the viewer. If actresses could die and find themselves reincarnated in bodies that were several decades younger, dying itself might become a popular cosmetic procedure – a means to escape the looping madness of continually trying to cheat time by trimming off five or ten years with fillers or Botox, and then having to redouble one’s efforts once the aesthetician’s spell wears off. As it stands, the only extant option is a kind of self-delusion, a willingness to suspend one’s disbelief, against all logic, and believe that it is possible to regain youth in increments.

Philippa Snow is a critic and essayist. Her work has appeared in publications including Artforum, The Los Angeles Review of Books, ArtReview, Frieze, The White Review, Vogue, The Nation, The New Statesman, and The New Republic.