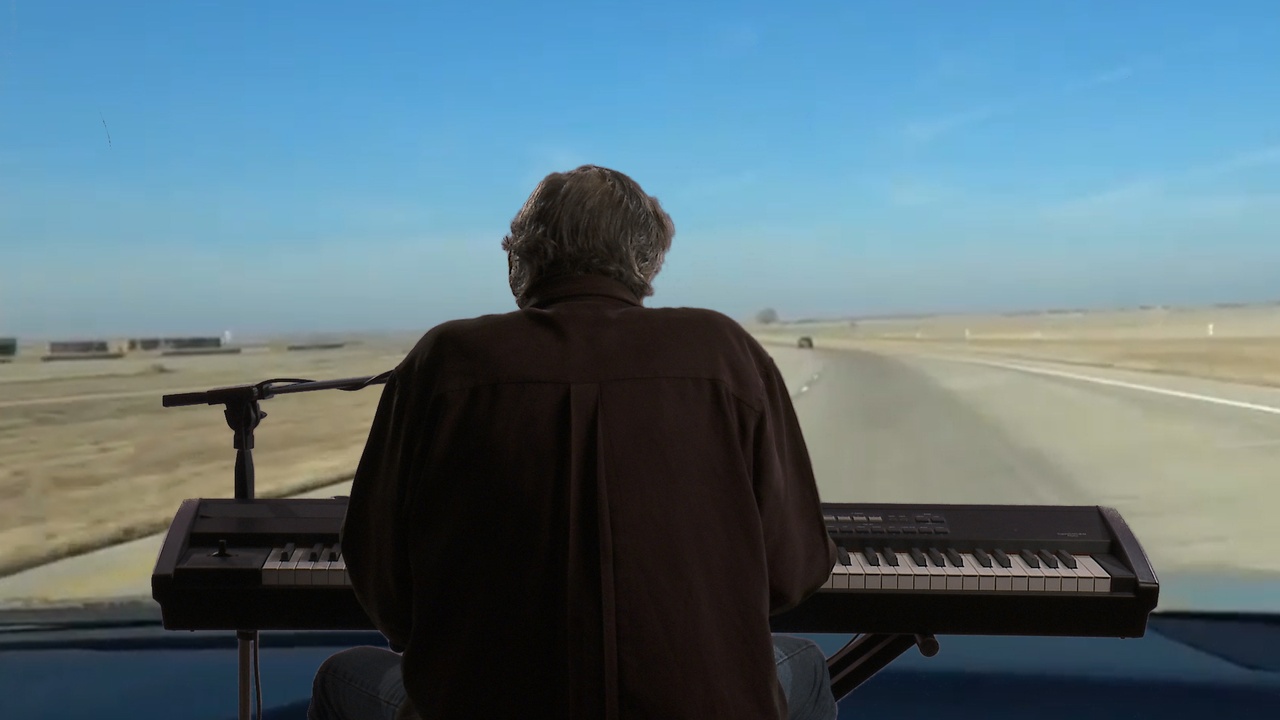 With the release of our new issue, our “Current Attractions” column enters the second phase. For the first iteration that picks up on the issue’s theme of “Resortization,” writer and novelist Stephanie LaCava has chosen Terry Allen’s country ballad “Truckload of Art” as a point of departure. Follow her on a short journey, on which Allen’s truck becomes a vehicle for reflections on the long distances art often travels, on cultural bubbles, on dueling art scenes, and on corresponding battles.

“Truckload of Art” is a song on artist-musician Terry Allen’s 1979 double album Lubbock (On Everything), originally released on Fate Records, the label Allen cofounded with Jack Lemon. This was Allen’s second record; the first, Juarez, included both music and narrative visual work (nine lithographs). The actual recording was produced in exchange for Allen’s poetry-covered prints; the other musicians and sound engineers received drawings. The art told the same story as the lyrics – of specific characters and events.

Allen, originally from Lubbock, Texas, now lives in Santa Fe with Jo Harvey Allen, his wife and collaborator of over 50 years. He spent some time in California attending art school (Chouinard Art Institute, before it became part of CalArts). As part of one of his classes, Allen was at the Pasadena Art Museum in 1963 to meet Duchamp – mid–chess game with Eve Babitz. Painting, sculpture, poetry, theater, and film would all become part of his practice.
Tenderly observing the characters encountered in all stages of life is paramount to storytelling. Many of the best narratives are gentle satire. Before and after art school, Allen’s landscape was and remains the Southwest. He speaks about its space and how it crops up in his own writing, both formally and thematically. There is talk of how different it is from even East Texas.
Allen’s music is in a Texan country tradition with nods to folk and rock. Before Lubbock (on Everything) was released, Allen and his band would do mostly art-adjacent gigs at galleries and museums. Later would come the clubs. A few years back, when Bob Dylan was asked about his taste in contemporary art, he responded by listing to Owen Smith, Terry Allen, and miniature golf courses.
“Truckload of Art” is both story and song. It begins with a spirited fiddle and Allen speaking the lyrics “Once upon a time” – live-narrating, while presumably sitting at his keyboard. It is a tale of dueling art scenes, New York and Los Angeles, but the geographic specifics are less important than ridiculing the rivalry.
The truck could be a plane or ship. Truck becomes jet, burning fuel, carrying crates in its belly. Self-serious men and women are in its velour-seated heart. Then, there’s an explosion of some kind, maybe over Gstaad. It rains atomized wood, canvas, pigment, and steel.
Back to the truck, hurtling along its fantasy highway in 1968, when Allen wrote the lyrics. A decade later, it would ride as song:
All fresh
With new American Flag decals and “ART ARK”
Printed on the side of the door
With solid 24 karat gold leaf type

This ark is a container ship, getting into the Port of Busan. Inside, those same crates are stamped and sealed to go to Seoul, South Korea. Not your typical resort destination. No matter. The boat says, “FAIR PLAY,” in big black letters on its starboard side. Below deck, there’s an electric flash and a fire breaks out. It quickly catches the crates and eats their insides. The flames vomit back heaps of ash.

Precious objects are scattered
All over the ground
And it’s a terrible sight
If a person were to see it
But there weren’t nobody around.

Allen keeps reading, and the driver of the truck is ejected and dies. Some godlike voice tells us,

Son you’re better off dead
Than haulin a truckload
Full of hot avant-garde.

And then, the art is on the side of the road, burning. A bonfire of the East Coast elite: the artists, painters, sculptors, musicians, poets, writers, dancers, and architects. Allen casts the West Coast “snotty surfer upstarts” as their “ego-counter parts.” There’s a dead driver, an overturned truck, and a blazing pyre signaling the end to all who pass. There is a final group, though, one of great merit, which Allen doesn’t fail to mention:

And what the critics have cheered
Is now shattered and queered
And their noble reviews
Have been stewed on the road.
Roadkill.
A truck to Los Angeles, a plane to Gstaad, a boat to Seoul – all end in art-hash.
Allen’s artistic wit is the thing that keeps on. It shows a repetitive strand of fascination: East versus West. Dueling landscapes.
There’s a trick in the song, one that becomes clear in hindsight, like so much noble critical analysis.
Could this be a very early version of spoken word rhapsodizing another East Coast–West Coast rivalry?
Doubtful – since Allen seems to stay far away from what’s considered the music industry. Still, it’s funny in a way he’d like. Picture the headline: “‘Truckload of Art’ Foreshadows ’90s-Era Hip-Hop.”

Stephanie LaCava is a writer based in New York City. Her work has appeared in Harper’s Magazine, Artforum, The New York Review of Books, Vogue, and Interview. Her debut novel, The Superrationals, was published by Semiotext(e) in 2020; her latest, I Fear My Pain Interests You, is published by Verso and will be out this month.