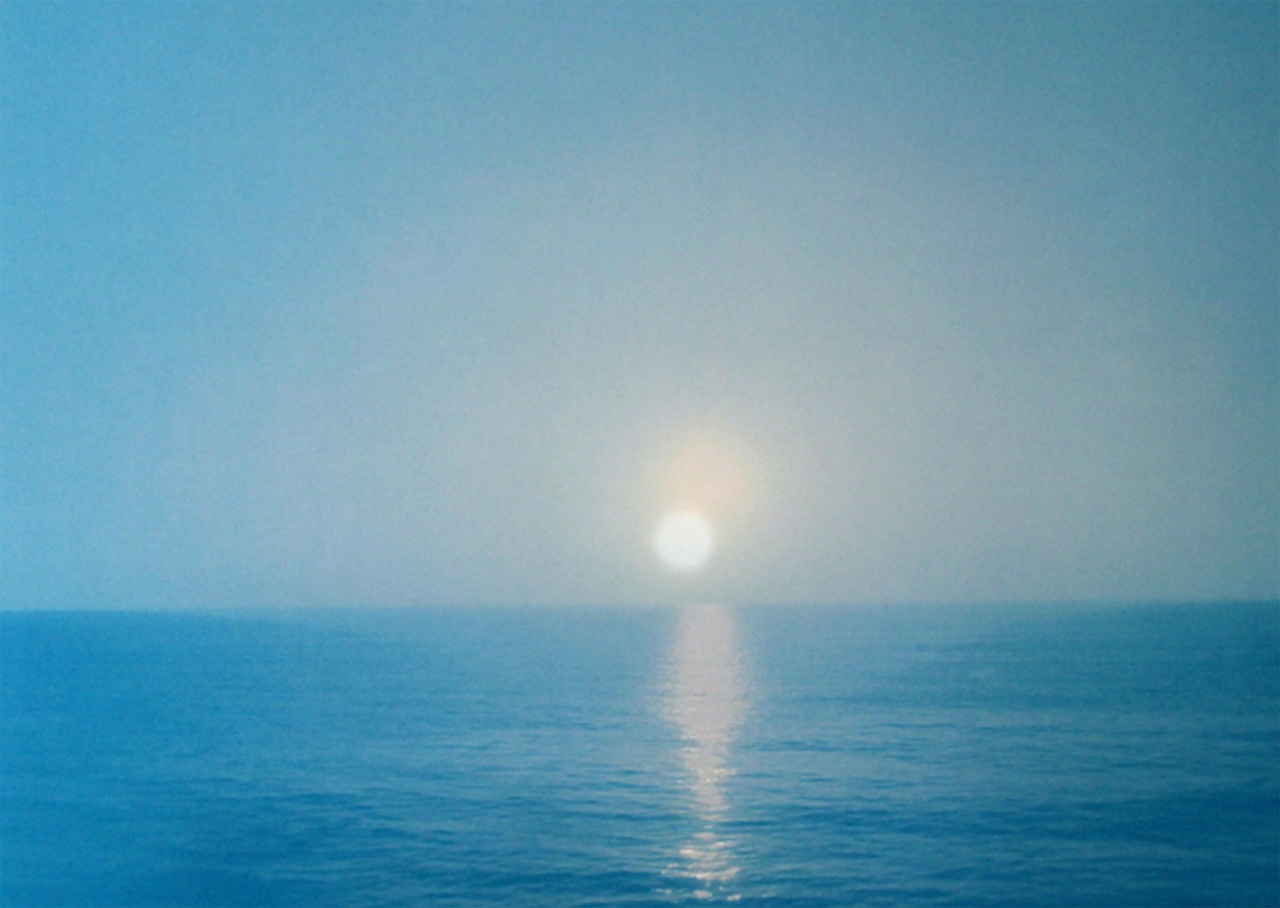 David Horvitz, “Two sunsets, viewed from the same place, by a mother and her son, some years apart,” 2013

Representations of sunsets abound both in the arts and on social media. Charged with symbolic as well as emotional meaning, these images recall the concept of the Jungian archetype, which has been criticized for reducing and romanticizing complex realities into something simple and collectively agreeable. Not least due to their archetypal allure, sunsets are trending on Instagram, where their presence is boosted by algorithms. Orit Gat looks into the popular postcard motif and its multimedia applications for the latest iteration of our “Current Attractions” column, which expands on the theme of our current issue, “Resortization.”

The other night at dinner a friend of mine was talking about the moon. How it’s impossible to ever photograph. You walk down the street and the moon is large and full above you, it feels so special, you instinctively pull out your phone. In the photo, the moon looks like a streetlamp. A haze, a non-proof. A sneaky impossibility.

2 Sunsets Are the Opposite

They’re everywhere: every tourist postcard has a sunset version, every device a sunset screensaver, every travel website a predictable sunset view. These images are never unique, they’re collective. You never need to explain why you took that photo of a sunset. We already know.

Legend is that a few weeks before he died, J. M. W. Turner told art critic John Ruskin, “The Sun is God.” [1] Turner’s paintings, his sunrises and sunsets, his water scenes with boats, revolve around the diffuse light of the day. Or maybe it’s Claude Monet's impressions of sunrise and sunset that come to many minds when sunsets are mentioned, though more likely it is not oil on canvas paintings, but rather, the fading sun captured by a camera. Roland Barthes writes in Camera Lucida that “What the photograph reproduces to infinity has occurred only once: the photograph mechanically repeats what could never be repeated existentially.” [2] A photograph documents something that “existentially” can never be repeated, still a sunset happens every day. On our phones, on social media, the event that Barthes writes about, the reproducing of what only happens once, is not only repeated, but also shared. Why even try to photograph the moon if not to reintroduce it to the world, via images. The impossibility of photographing the moon may save it from what happened to the sun: a flat sameness, an endless stream of similar images.

Sameness sounds negative, but if I said “accord” it would be a different proposal. Exhibition-goers on social media often tend to post similar images of the same artworks. It makes sense: in any given exhibition, a few artworks may shine, become resonant, and reappear across all documentation, especially on social media. Then viewers who have seen these images want to confirm what they already know, to feel what happens when an image becomes reality. A Yayoi Kusama Infinity Mirror Room, photographed to death, still features across Instagram. In these snaps, what is documented? Is it Barthes’s repetition of what cannot be reproduced, an event, or is it viewers inserting themselves into the experience? You could say that all of their photographs are the same – a version of a selfie, a self-within-a-work, a mirror image – but isn’t the sameness also an account of participation, of a desire to see for oneself. And if that self is unique, isn’t the selfie, too?

With all these questions in mind, I look up #sunset on Instagram and there are over 300 million posts (also #sunsetlover and #sunsetlovers, #sunsetphotography and #sunsetporn). It’s not that they are all the same – they’re not even all of sunsets – but they feel like they belong in a specific universe of imagery. It’s a universe that draws on what is collectively shared, from the Turner paintings to screen savers that come preloaded on your phone. It’s sunsets on the beach or the view of skyscrapers against the warm dusk. Like agreed-upon magic. And still, a sunset is also a disappearance. Perhaps that is why those photographs are so often accompanied by text about seizing the day, reminders of how you only live once, talk of paying attention, following the sun (“wherever it leads you”), multiple song lyrics by The Beatles, a few mentions of heaven, more of the universe.

I google “sunset” to see what images would appear, but the first result is “19:49,” which feels both romantic and technical, a reminder that, beyond all the narrative added onto it, the sunset is something precise. I am writing about an image, that is, an imagined state – the pink light, magical hour, live-the-day/pay-attention atmosphere that Instagram promotes, which is about holding onto something fleeting. But I am also writing about 19:49, about observing the universe around you in specific terms, not just as image inflected with narrative.

The thing about the Instagram quotes, hashtags, and hackneyed captions, the thing about the overexposure is not that it’s so banal or that it flattens out ideas of what is beautiful. It’s that even with all that cynicism and distance of recognizing tropes, I wonder, does anyone actually hate sunsets? These photos do nothing to add to a visual vocabulary, they just join it, celebrate its existence. There’s no way around it: Can anyone take a new image of a sunset?

5 A New Sunset (Taken by a Nonhuman)

The first time I saw photographs of sunset on Mars, taken by NASA’s Spirit Mars rover in 2005, I was amazed by how it fit an imagination of another world that was already lodged in my brain. Like a ghost image I didn’t know I had, blue, gauzy, and distant, almost abstract, still very real. On NASA’s website, I read about why photographs of sunrises and sunsets on Mars are tinged in blue, even though Mars, the planet whose soil is rich with iron oxide, is red. The language feels evocative, like it brings you closer to the faraway planet, but it also relies on the familiar image of an Earth sunset to show the world anew. “Just as colors are made more dramatic in sunsets on Earth, Martian sunsets would appear bluish to human observers watching from the red planet. Fine dust makes the blue near the Sun’s part of the sky much more prominent, while normal daylight makes the Red Planet’s familiar rusty dust color more prominent.”#A2

6 Blue and Other Colors

This is quite universal, but since I am writing about what is familiar, collective, and shared, I’ll say it anyway. I think of a sunset as a warm palette: red, yellow, orange. The blue shade of a Martian sunset is part of its elsewhereness and shades it with longing, a sentiment of distance that feels perhaps related to the seize-the-day of Instagram sunsets. Both imbue an image with intangible, hard-to-explain and easy-to-feel meaning. I write about what is shared – in imagery, in expectation – and somehow still, despite all that is already known, it can feel so evocative. A sunset can still be haunting, moving, atmospheric.

(The title of this essay is taken from a nail varnish name. It’s a deep coral-orange.)

What does well on Instagram is what is repeated and recognizable. The hashtags allow users to congregate around ideas – #sunset – of what matters or summarizes the experience. A new sunset, a blue sunset, is not what the economy of digital imagery promotes. But to lean on the shared collective imagery – again, #sunset – could be a place from which to reflect on the space between event and experience – what is reproducible, what isn’t. Risking cliché, still finding a path through commonality to reflection.

The title of David Horvitz’s 2013 installation The Distance of a Day suggests a gentle shift in how we conceive of distance: from place to time. In the work, Horvitz asks his mother to film the sunset on the beach by her home in California, while he films the sunrise in the Maldives at the same time. The two short digital videos are presented side by side on iPhones mounted to the wall. Same time, different place, same visual vocabulary, so far away. I see that title, The Distance of a Day, as a reminder that all this romance doesn’t hide the fact a sunset is also an ending. Horvitz made another sunset piece with his mother that year, a photograph in multiple exposure, Two sunsets, viewed from the same place, by a mother and her son, some years apart. In both works they share a view but are still apart.

8 When My Friend Was Talking About the Moon

She said, “pic or it didn’t happen” and all I could think about was loss.

Orit Gat is a writer based in London. She is a contributing editor at The White Review and Art Papers and her work has appeared in numerous other magazines as well. She is currently working on her first book, a memoir about the politics of watching football titled If Anything Happens.

Image credit: Courtesy of the artist